sE at GearFest 2021 with Myles Kennedy and Fred Mascherino!

GearFest 2021 has officially kicked off!

We’re thrilled to showcase videos from Myles Kennedy (Alter Bridge, Slash) and Fred Mascherino (The Color Fred, Taking Back Sunday, Say Anything and many more).

This special edition V7 MK is the signature vocal microphone for the one and only Myles Kennedy!

Best known as lead vocalist for stadium-filling rock acts Alter Bridge and Slash of Guns ‘n Roses, Myles has been touring the world for years. His experience, and expectations, ultimately led to our cooperation featuring the very same capsule technologies found within the acclaimed V7, including its specialized aluminum voice coil for crisp and open vocals.

“After nearly 30 years of touring, sE and I joined up to create the V7 MK – my personalized take on their flagship vocal mic. The V7 MK dynamic vocal microphone has the perfect combination of extended frequency response and external bleed rejection to help me hear every detail while keeping me from pushing too hard on stage!” -Myles Kennedy

The V7 MK is everything the V7 offers and more: it’s the perfect choice for the most challenging environments and demanding applications, enabling your best performance, providing unparalleled clarity and effortless pristine sound, combined with cool looks!

Showcasing the sE8 omni’s natural sound characteristics right out of the box. With the very same sophisticated capsule backplate design and true condenser technology, the sE8 omni provides an authentic and transparent sound quality second to none.

Having the lowest noise and highest SPL capability in its class, the sE8 omni is the perfect choice for demanding applications like recording orchestras, ensembles and choirs but equally good for solo instruments, vocals and percussion. 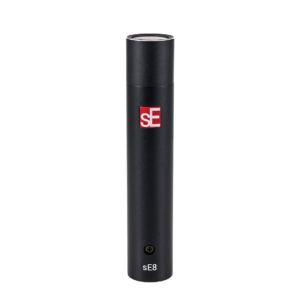